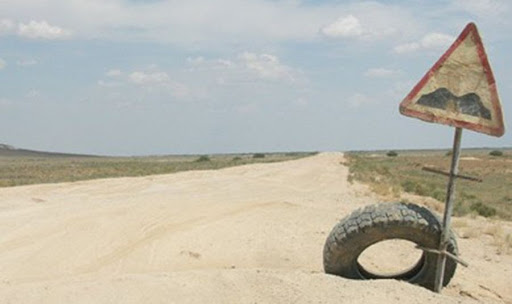 The road is 428km long, mostly unpaved.
First 130km are good asphalt (with 20km good dirt), then about 200km good dirt (mild corrugations but a nice drive at 80), then last 100km-ish is asphalt which varies from very bad to OK. 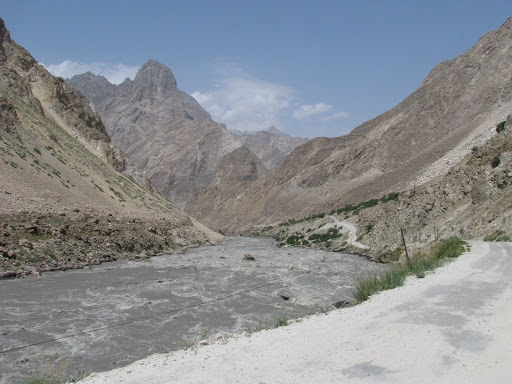 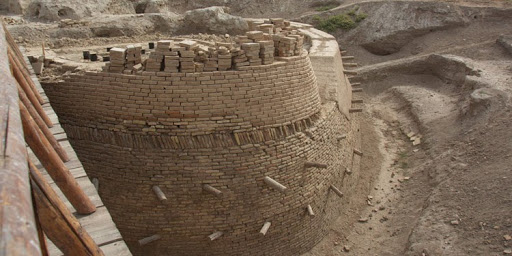 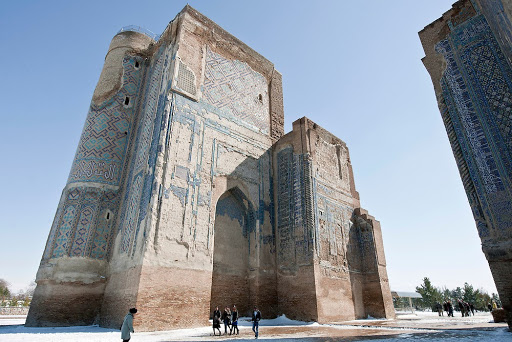 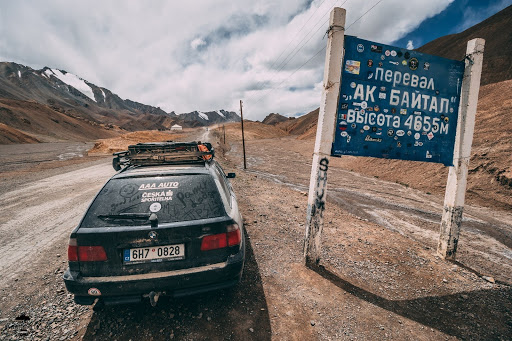 Ak-Baital pass is a high mountain pass on the border of the Republic of Tajikistan (GBAO region) and Kyrgyzstan at an elevation of 4.655-meter (15,270 ft) above the sea level. The pass is a part of the Trans-Alay Range and it’s the highest road pass in the former Soviet Union.

Pereval Akbaytal is crossed by M41 road, known informally and more commonly as thePamir Highway. It's the highest point of this infamous route. This section of the road is barely passable. Throughout the area, the land is typically rugged and dry. This road is sometimes referred to as “The Road from Hell”.
Construction and maintenance levels vary substantially along the highway. The roadway is paved is some areas, but is mostly unpaved. The high pass of Ak-Baital will get you closer to the moon than perhaps you’ve ever been, and not just because of the head-swimming altitude – the landscape is lunar barren and otherworldly, though a little wetter than the earth’s orbiting rock – beautiful blue water lakes bejewel the area, the best being the haunting deep of a lifeless Lake Karakul. Travelling through here is like a trip to a parallel world, where the landscape is bigger, bolder and infused with the eerie, all under the high, wide presence of a brilliant blue sky.
This is a hard climb even for 4-wheel drive vehicles and it can produce headache and difficulty breathing. The dusty roads and constant wind mean that you get a bunged up nose which makes it harder to breath and the just getting in and out of the vehicle is hard work. This part of the Pamir Highway (M41) heads to Murgab through the Muzkul Mountains and the Ak-Baital pass is the highest pass in the former USSR. Along the way you may be lucky and see a few yak wondering around by the road. The surface of the road is mostly unpaved, and chains or snow tyres can be required anytime. The road is heavily damaged in places by erosion, earthquakes, landslides, and avalanches. The road was built during Soviet times, to connect parts of their imperium in this region. Since the breakdown and Central Asia’s independence, not much coherent maintenance has been done to the road, only in spots, where damage has been caused by flash floods or scree.
Pic: Gareth Williams
http://dangerousroads.org/asia/tajikistan/3221-ak-baital-pass.html
15,264 ft
Waypoint 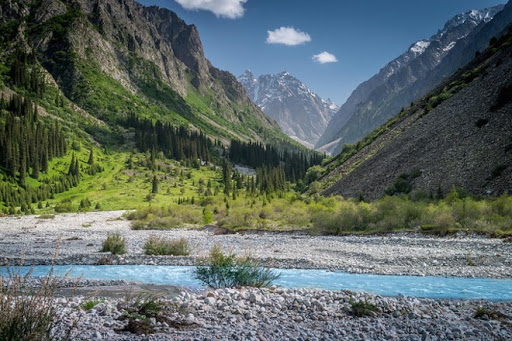 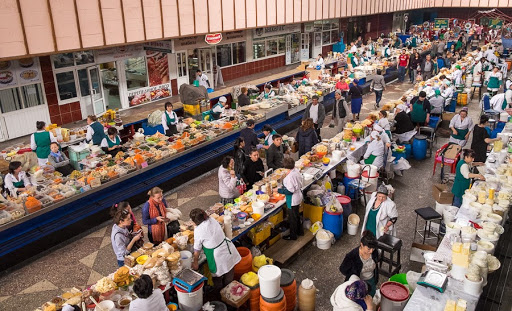 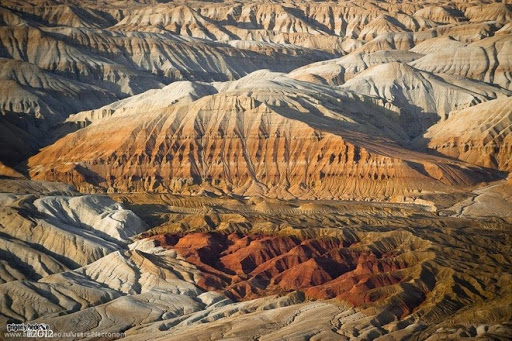 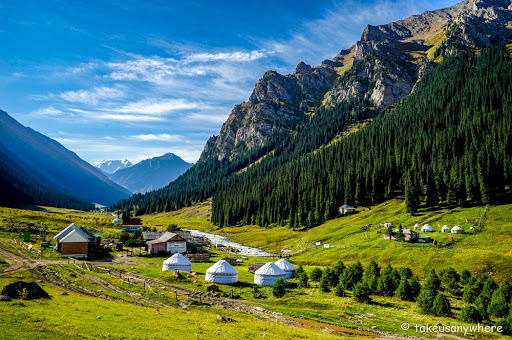 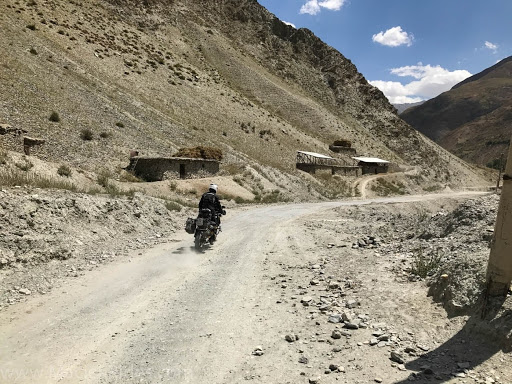 Anzob Pass is a high mountain pass, at an elevation of 3.372m (11,062ft) above the sea level, located northwest of Tajikistan's capital Dushanbe. The pass is located between Dushanbe and Samarkand and there’s a weather observation station located at the pass top. The climb is a series of narrow zigzags, with some impressive drops to the valley below.

The road to the summit is gravel, dusty, bumpy and dangerous. Your wheels will be astounded at the wonderful views of the mountains spread out before you! They are terrible for drivers who are prone to vertigo. The road is very steep (20km averaging 7-8% in gradient), narrow, muddy and without a safety rail. You'll feel like leaning into the car and away from the edge, even with the safe experienced hands of your Pamiri driver behind the wheel. In many places the road is bordered by a drop of hundreds of meters (many hundreds of feet) unprotected by guardrails.
The Anzob Pass is usually open from May through November. The wind is usually quite strong at mountain areas. High winds blow here all year long. Even in summer you can confront with snowy days. The pass is one of the most treacherous mountain passes of Central Asia. On October 23, 1997, an avalanche killed 46 people, burying 15 trucks and cars. The avalanche was so large that it took two weeks for the would-be rescuers to reach the victims. Some road sections may require a high clearance 4WD vehicle, in four-wheel-drive, driven by a driver experienced in 4WD drive techniques to drive the road without getting stuck. From the top of the pass there are stupendous views of the Zarafshan mountain range.
Located in the Fan Mountain range, the pass links Dushanbe, Tajikistan’s capital, with the northern Fergana valley and the country’s second city, Khujand. Do not travel this road in severe weather conditions. Avalanches, heavy snowfalls and landslides can occur anytime, being extremely dangerous due to frequent patches of ice. The pass can be blocked in summer too, when rock falls have been known to block the pass for several weeks due to their severity, and rescue is difficult. It’s a real challenging road and a true test of your vehicle and your stamina because the road abounds in twists and turns with wheels sometimes hanging above the precipice.
On 2006, the pass was bypassed by a dangerous tunnel below the summit called Anzob Tunnel,or "The Tunnel of Death". It's said to be the most dangerous tunnel in the world.
10,473 ft
Waypoint 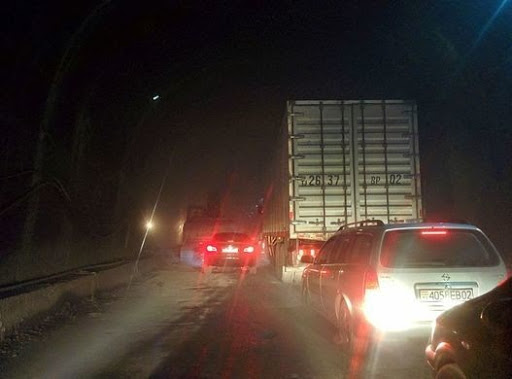 This dark, damp, perilous tunnel is the only passage from north to south Tajikistan.

Located in the Sughd Region of Tajikistan, the Anzob Tunnel is said to be the most dangerous tunnel in the world. Called the Tunnel of Fear and the Tunnel of Death by locals, it lacks proper lighting and ventilation, breathing is hard and painful due to the thick mixture of exhaust gases.

The tunnel is traversed by the M34 highway, the main road between Duschanbe, the capital of the country, and Khujand, the country's second largest city. Built by Iranian workers but never finished, the tunnel is 5049+260m long at an elevation of 2.700 meters above the sea level. It was built to bypass the infamous Anzob pass.The tunnel is dark and dangerous with hardly any lights inside and it’s suffocating as there’s no ventilation bar one fan. Locals have shared stories of a number of people dying inside it due to traffic jams that leave people trapped, where they succumbed to carbon monoxide. The tunnel floor is a maze of deep, seriously deep, potholes hidden under a constant stream of water, the tunnel is strewn with abandoned construction machines and filled with the noxious black smoke of clapped out lorries. The poisonous air in the tunnel is barely shifted by one solitary fan somewhere in the middle of the tunnel, which gives some, but not sufficient movement to the air.
8,963 ft
Waypoint 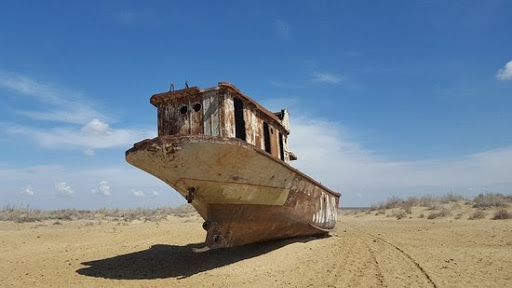 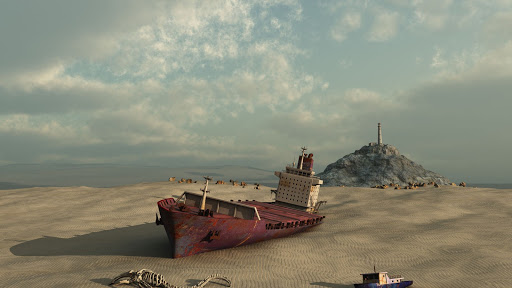 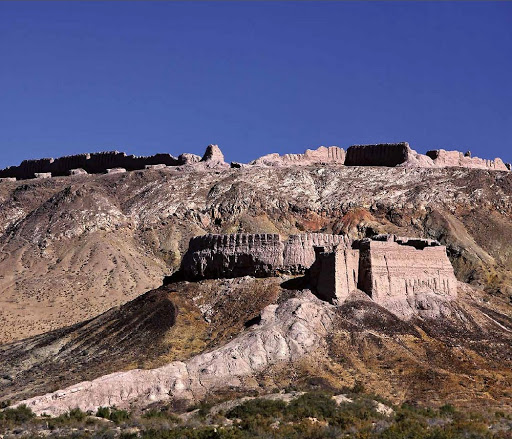 On the colorful cliffs of one the Sultauizdag eastern spurs, in the Kyzyl Kum desert there survived ruins of one of the largest castles of ancient Khorezm– Ayaz-Kala. Ayaz Kala is located on the western side of the Sultan-Uiz-Dagh Mountains. The site consists of three fortresses which were built from the 4th cent. BC to the 7th cent. AD. The fortresses were part of a series of forts located at the edge of the Kizilkum Desert, which provided defence 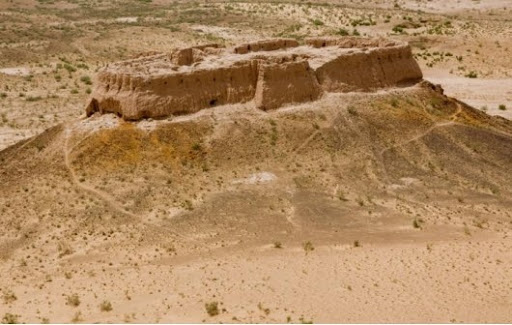 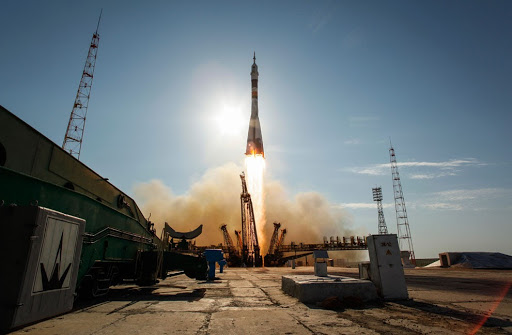 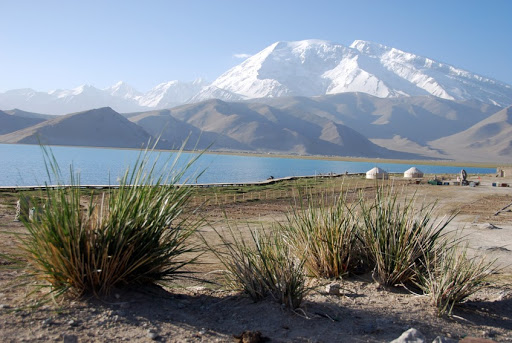 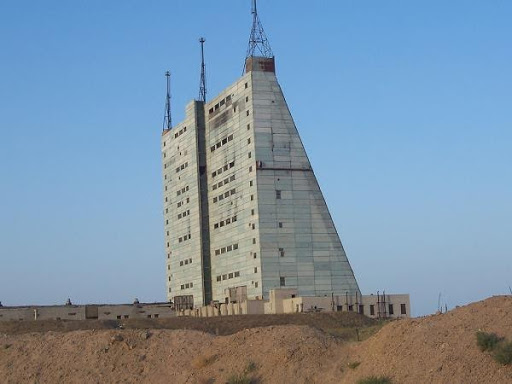 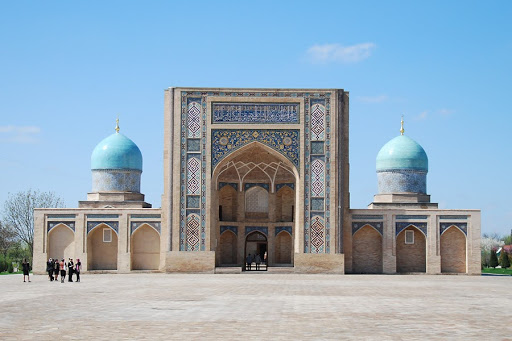 Barakh-Khan medreseh is located next to the square of Hazret Imam to the east, among the clay-walled buildings of the old city. In honour of the Khan, this Medreseh has developed as a religious-memorial complex. It underwent several stages of construction and was completed in 1532 (2nd half of the 16th c.).
1,485 ft
Waypoint 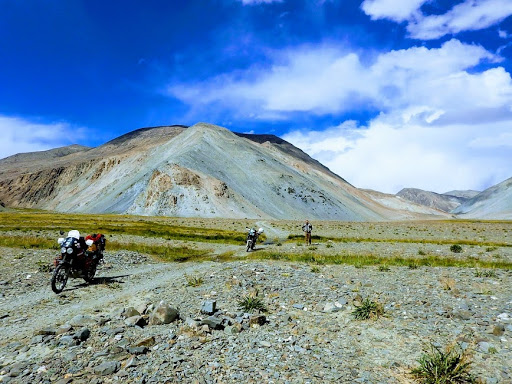 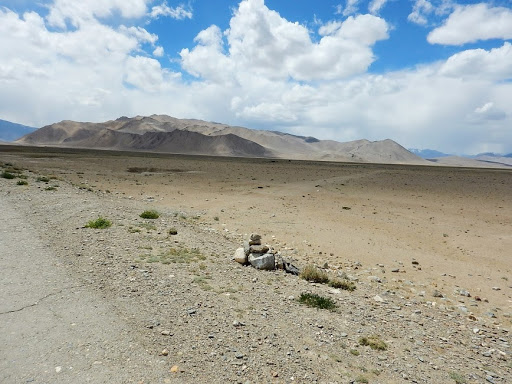 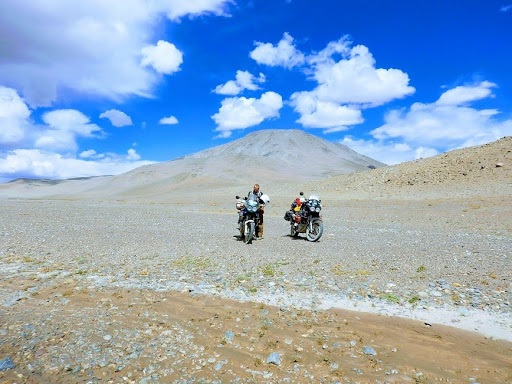 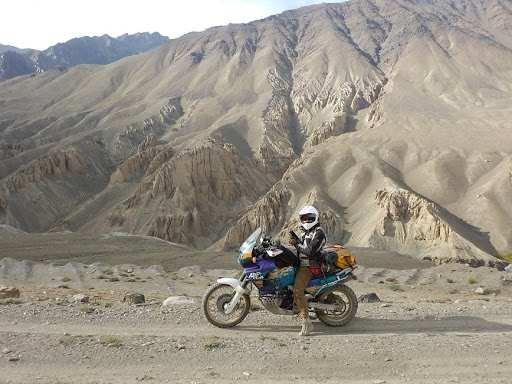 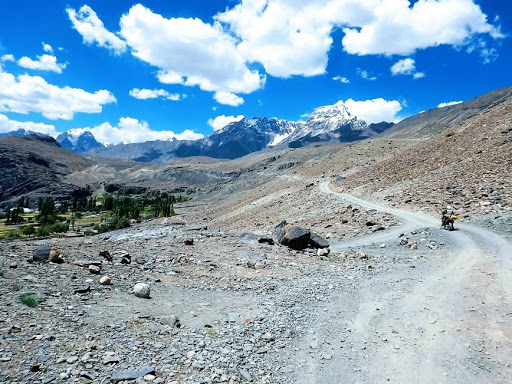 Base Camp for Peak Lenin 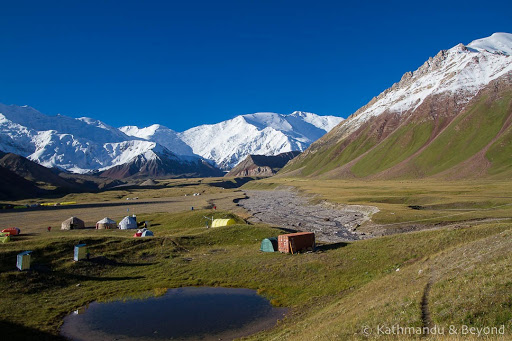 Lenin Peak is a high mountain peak at an elevation of 3.623m (11,886ft) above the sea level, located in Gorno-Badakhshan (GBAO) on the border of Tajikistan and Kyrgyzstan.

Located within the Trans-Alay Range of Central Asia, the road to the summit is gravel. It’s very rough. Only 4x4 vehicles. The road is impassable after rains. If you dare to take the risk and travel along this dusty and bumpy route, then make sure to be driven by someone who has experience of the road.
The summit, also known as Ibn Sina (Avicenna) Peak, is infamous for its bad and unpredictable weather. Road conditions can in places be pretty rough. The climb is simply terrible, with a notorius lack of oxygen that tests the organisms and a high degree of steepness. Most people feel altitude sickness at around 2,500-2,800 meters. Near the pass, oxygen is in short supply. 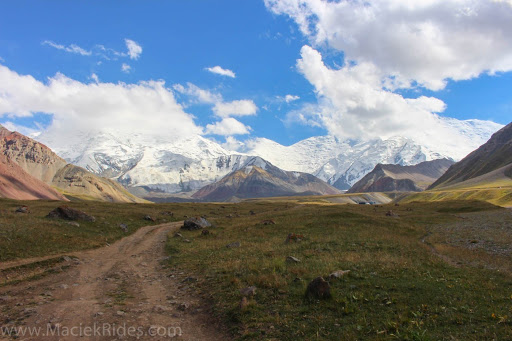 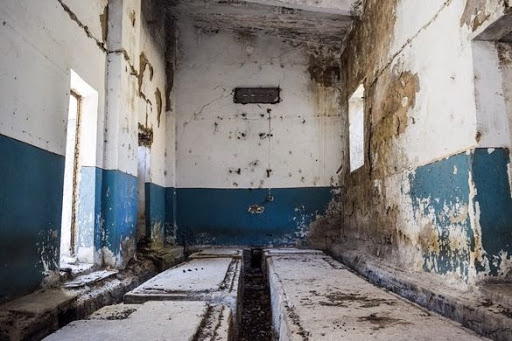 https://www.atlasobscura.com/places/bayzhansay
These deserted stone buildings in the Karatau mountain range were once the envy of nearby Soviet towns.
3,085 ft