High Line, a revitalized piece of New York City’s past

A great hint to help you choose your outdoor gear and clothing!


English
The High Line is a public park built on a historic freight rail line elevated above the streets on Manhattan’s West Side. It runs from Gansevoort Street in the Meatpacking District to West 34th Street, between 10th and 12th Avenues.


1934 As part of the West Side Improvement Project, the High Line opens to trains. It runs from 34th Street to St John’s Park Terminal, at Spring Street. It is designed to go through the center of buildings, rather than over the avenues carrying goods to and from Manhattan’s largest industrial district. 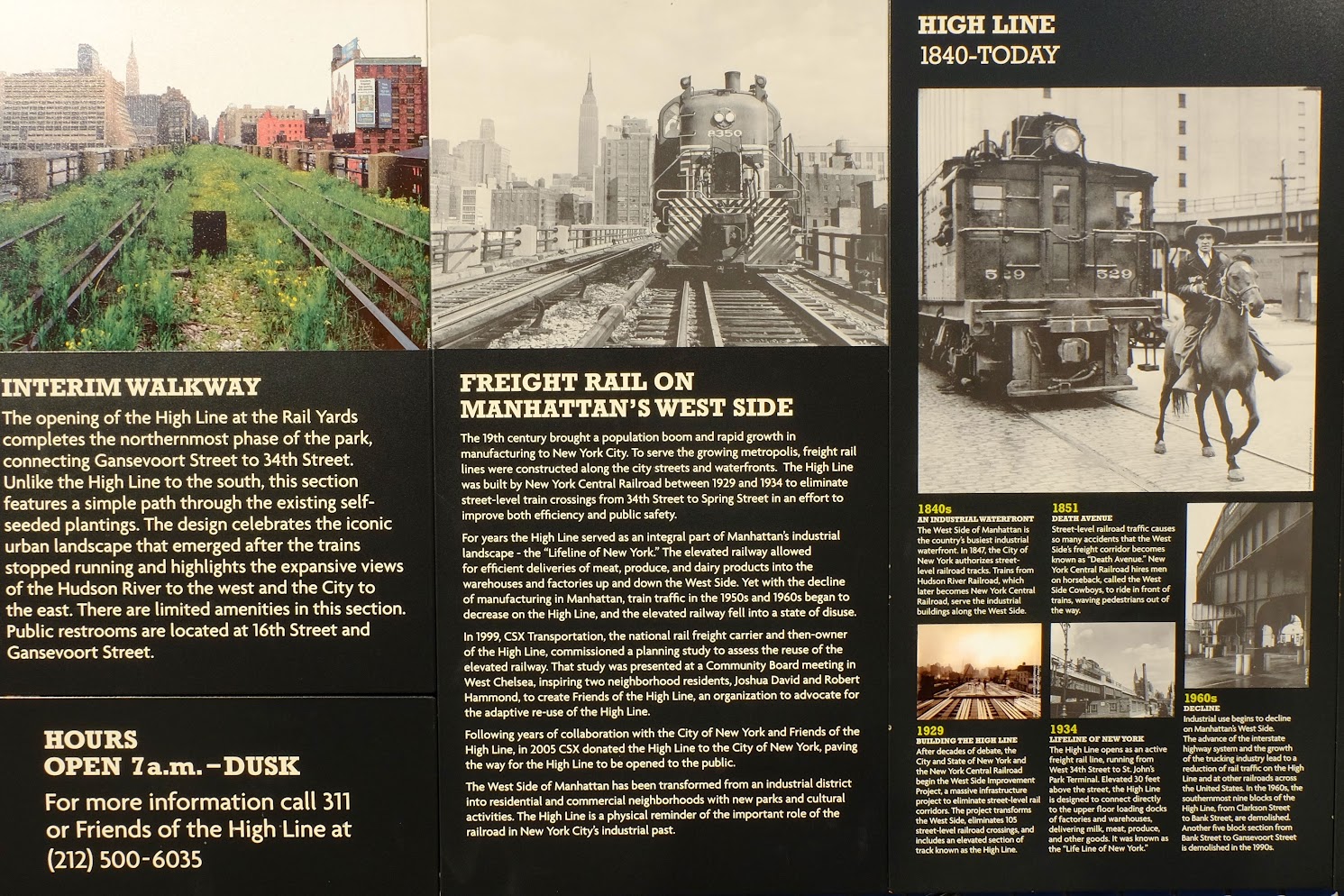 1980 The last train runs on the High Line in 1980, pulling three carloads of frozen turkeys.


1999 The non-profit advocacy group Friends of the High Line is founded by Joshua David, Robert Hammond, and other community members to campaign for the High Line’s preservation and reuse as public open space.

The first section of the High Line (from Gansevoort to 20th Streets) opens in June 2009 .

The High Line is now maintained, operated, and programmed by Friends of the High Line –a non-profit conservancy– in partnership with the New York City Department of Parks & Recreation.


1. High Line at the Rail Yards
Stand on top of the 11th Ave- nue stairs and enjoy the 360° panoramic view that includes the Interim Walkway with its self-seeded landscape; the Hudson River; midtown’s sky- scapers, industrial landmarks, and modern buildings; and the trains of the West Side Yard. In coming years, the railyards will be built over and developed into Related Properties’ Hudson Yards, a 26-acre mixed-use project.

2. Rail Track Walks
Here exposed original rail tracks allow you to walk along a path once travelled by freight trains.

3. Philip A. and Lisa Maria Falcone Flyover
As the High Line passes between two monumental former storage warehouses at West 25th Street, a grated metal pathway – the Falcone Flyover – begins to lift from the structure’s surface. Stretching for three blocks, the Flyover allows visitors to travel through a grove of bigleaf magnolia, sassafras, and serviceberry trees at canopy-level.

4. High Line Art Mural
Artist Barbara Kruger’s large- scale, hand-painted mural Untitled (Blind Idealism Is...) is installed on the wall of a neighboring building at West 22nd Street. This mural is one of 30+ artworks on view this year as part of High Line Art.

6. 10th Avenue Square
This unique space where the High Line crosses 10th Avenue (at West 17th Street) was created by removing some of the railway’s steel beams. The resulting amphitheater-like space boasts views up 10th Avenue to the north and views of the Hudson River and de Statue of Liberty to the South.

7. Northern Spur Preserve
At West 16th Street, a spur splits from the primary High Line structure and crosses 10th Avenue. The spur’s plantings evoke the wild landscape the grew on the High Line before it was a park.

8. Chelsea Market Passage
This semi-enclosed passage, between West 15th and West 16th Streets, features art and public programs, as well as food carts and an open-air cafe during the warmer months.

9. Diller-Von Fustenberg Sundeck & Water Feature
This pathway, between West 14th and West 15th Streets, is anked by lounge chairs and a water feature that offers visitors a chance to dip their toes during the spring and summer. You’ll also catch some of the best views of the sunset from here.

10. Tiffany & Co. Foundation Overlook
A dramatic balcony marks the point at which the High Line was severed in the 1990s and demolished south of Gansevoort Street. The overlook offers a view eastward to the Meatpacking District and westward to the newly-opened Whitney Museum of American Art.

High Line at the Rail Yards